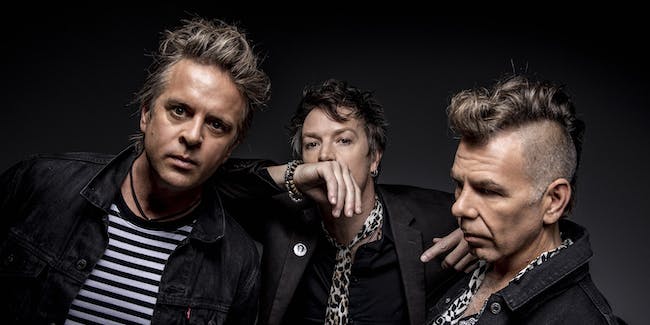 When rock bands get a bit older, the kind of music they make tends to change a bit, too. People start referring to it differently, using phrases like “old school” and “dad rock”. Some bands, understandably, get caught up in it––doing the big rock-opera thing, moving into new sounds, writing crazy concept albums. The Living End have been around nearly 25 years. They’re into what would probably be ‘dad rock’ territory for most other rock bands. Of course, The Living End––the iconic trio of Chris Cheney, Scott Owen and Andy Strachan––have never been most other rock bands.

Their eighth album, Wunderbar, isn’t an expansion into electronic sounds, or a step into soft-rock crooning. It’s not needlessly baroque, or needlessly minimal. As lead singer and guitarist Chris Cheney says, “We’re not trying to re-write Dark Side of the Moon or anything.” Instead, Wunderbar does what The Living End do best, what’s kept hundreds of thousands of fans listening for nearly a quarter of a century: straightforward, heart-pounding, guns blazing rock and roll. It’s what The Living End are known for. It’s what they’re good at. It’s what they love. And Wunderbar is their best straightforward, heart-pounding, guns blazing rock and roll album yet. Andy insists that keeping the formula simple is the key to The Living End’s success: “We still get off on playing live and giving 100%,” he says, “We still try to write the best songs we can, and we still give a shit! Which is probably why we’re still together.”

Wunderbar came together quickly, faster than a Living End album has ever really been made. After deciding to write and record a new LP in September 2017, the band booked recording and preproduction sessions in Berlin, Germany, for January 2018, giving them four months to write an entire record. “We had limited time to write,” recalls Chris, “which we were freaked out by at first. But it turned into a good thing because it meant full steam ahead.” And full steam ahead they went: from its initial, harebrained conception, The Living End ended up writing one of the most raw, conscious, and politically vital albums of their career. Some artists can’t work under pressure; The Living End, it seems, thrive on it.

After writing an album’s worth of songs (and more), Chris, Scott and Andy decamped to Berlin, where they holed up in a studio with producer Tobias Kuhn. The band had never worked with Tobias before, but found that they forged an instant connection with him. “Chris and I have grown up together and basically shared musical tapes with each other since we were kids,” says Scott, “and we can speak our own language sometimes when it comes to music. But Tobias spoke that language too. He knew everything we were talking about.”

A live-wire in the studio (“His arse is normally a few inches above the chair because he's rocking out,” says Scott) Tobias was like a shot of steroids to the heart for The Living End. Wunderbar wouldn’t be the same without him.

And it wouldn’t be the same without Berlin, either. Living in an Airbnb with no heating, Chris, Scott and Andy felt the brunt of Berlin’s icy winters. But if the band hadn’t been pulled out of their comfort zone, there’s no way they would have been able to put together a record like Wunderbar. “Berlin’s such an amazing place,” recalls Scott. “There’s no better place in the world for rock and roll bands to make dirty, gritty rock and roll music.” Decamping to the city where icons like Iggy and Bowie and Eno was a huge inspiration for The Living End, and helped tap into the same punk spirit that initially made them so famous.

This punk spirit is encapsulated in “Don’t Lose It”, the album’s pummelling, driving lead single. Built around iconic Cheney pearls like “It only takes one split decision/ To end up in a head on collision”, “Don’t Lose It” is a portrait of The Living End as they are in 2018: fiercely proficient, proudly rebellious, and emotionally resonant. Elsewhere, subtle shifts mark exhilarating new ground for The Living End. “Otherside”, a tale of jealousy and ambition, is slyly melodic, an anthem through and through. “The grass is always greener,” says Andy of the track, “but sometimes you have to stop to look at what you have. You soon realise that things could be much worse.” It’s the kind of lyrical nuance that the band have become so good at over the years, and which they perfect on Wunderbar.

The album’s tenor is encapsulated in “D.E.A.T.H.”, Wunderbar’s best and most political song. It doesn’t sound like anything else. It’s The Living End through and through, and feels like the kind of song Chris was born to write. “After having lived in the States for almost seven years, I felt sympathetic towards them,” says Chris of his inspiration behind the song. “It’s become a bit of a laughing stock. The Cadillac broke down.” “D.E.A.T.H.” isn’t your typical ‘Fuck Trump’ anthem though; it’s also a love letter to what the country used to be, and what it could be. What begins as a rousing, scream-along anthem––with backing vocals from Die Toten Hosen, Germany’s biggest rock band, too––ends as a raw, acoustic ballad, lamenting the death of the American Dream. It’s moments like these that show Chris’s depth as a songwriter, and how far he’s come since writing songs like “Prisoner of Society” all those years ago. It’s a perfect representation of The Living End in 2018. Some bands grow old, and make ‘dad rock’. Some bands fizzle and die out. The Living End, however, are only just getting started.