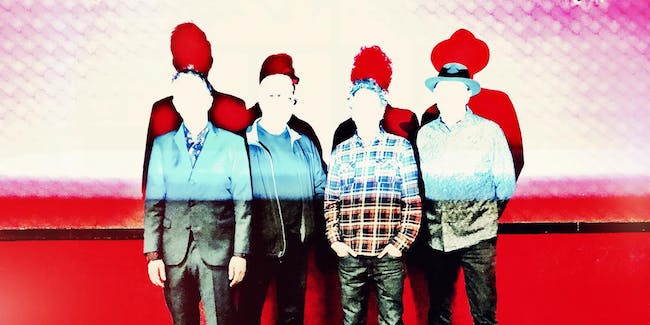 THERE ARE TWO PHASES OF THE DREAM SYNDICATE. THERE WAS THE BAND WITH REVOLVING LINEUPS THAT EXISTED FROM 1982 TO 1988 AND MADE FOUR ALBUMS INCLUDING “THE DAYS OF WINE AND ROSES” AND “MEDICINE SHOW,” BOTH OF WHICH REGULARLY SHOW UP ON BEST-OF LISTS AND HAVE INFLUENCED BANDS AND DELIGHTED FANS IN THE YEARS SINCE.

And then there’s the band that reunited in 2012 and is closing in on its seventh year, longer than the run of Phase One, with nary a lineup change. This 21st Century version of the Dream Syndicate released “How Did I Find Myself Here” in 2017 to universal acclaim, no small feat for a band reuniting after almost three decades.

I mean, go ahead. Try to name a band whose reunion record stacks up against the music they made the first time around. Go ahead. We’re waiting.

“I felt like we threaded the needle pretty nicely on the last album,” says founder and singer/guitarist/songwriter Steve Wynn, “referencing who we were and what we had done the first time around but also taking it all someplace new and fresh. It’s a tough balance. Ignore your past and you’re just using the band’s name for convenience, mire yourself too much in the past and you’re a parody—you are your own Rutles. We did neither. We were proud of the record and it was really nice to see that our fans and newcomers alike felt the same way. We were able to go out and play shows of mostly new songs and it really made us feel good to see that the audience knew the record and it was what they had come out to hear us play.”

Therefore, with that reintroduction and a full year of touring behind them, the Dream Syndicate had the freedom to take it all somewhere new, to dig a little deeper, get outside of themselves a little bit. Their new album ‘These Times’ (May 3, ANTI-) feels like a late-night radio show that you might have heard as a kid, drifting off into dreams and wondering the next morning if any of it was real.

“That was my favorite way to hear music” says Wynn. “Radio under the pillow, KPPC-FM in Pasadena playing the Persuasions, Van Morrison, Captain Beefheart, Miles Davis, Neil Young, Yes, Curtis Mayfield and Roxy Music. It all fit together somehow, one hazy, psychedelic stew that held together mostly because of the late hour, the state of consciousness and the willingness to be absorbed by it all without filter or fear. Complete immersion in another world.”

So, what does it sound like? If “How Did I Find Myself Here” was a 10 pm record, all swagger and cathartic explosion, then “These Times” is the 2 am sibling, moodier and more mercurial, the band acting as DJs of their own overnight radio station, riffing on an idea of what a Dream Syndicate album could be at this moment in time. It is Radio DS19.

“When I was writing the songs for the new album I was pretty obsessed with “Donuts” by J-Dilla. I loved the way that he approached record making as a DJ, a crate-digger, a music fan wanting to lay out all of his favorite music, twist and turn the results until he made them into his own. I was messing around with step sequencers, drum machines, loops—anything to take me out of my usual way of writing and try to feel as though I was working on a compilation rather than ‘more of the same’. You might not automatically put The Dream Syndicate and J-Dilla in the same sentence, but I hear that album when I hear our new one.”

There is the same lineup as the last album—Wynn, Jason Victor, Mark Walton, Dennis Duck and Chris Cacavas. But the ace in the hole this time around is Stephen McCarthy of Long Ryders who added backing vocals to most of the songs and takes it all someplace new and dreamier, much as he did on “Medicine Show” way back when. Linda Pitmon (Filthy Friends, Arthur Buck, The Baseball Project) adds backing vocals as well. “We did all of the backing vocals in one day, the last day of the session and they transformed what we had—they’re really as big a part of the end result as any other instrument on the record. We were really never much of a harmony band but that changed this time around.”

The band recorded once again at Montrose Studios in Richmond, Virginia. Co-produced this time around by John Agnello (Phosphorescent, Waxahatchee, Hold Steady, Dinosaur Jr and a good chunk of Wynn’s own records). “Almost all of the songs were written in the last year so it all feels really new to all of us which is pretty exciting,” Wynn explained. “Just like the last time, I wrote the lyrics after we finished tracking so that the words would be dictated by the sound rather than the other way around.”

So, what’s it all about?

“These Times. That’s it. It’s all we’re talking about, all we’re thinking about. There’s no avoiding the existential panic of a world that’s hurtling somewhere quickly and evolving and shifting course by the hour. It seems like a lie to not address or reflect the things that we can’t stop thinking about—the whole world’s watching indeed. The lyrics are just a mirror of the dread, panic, mania, speculation, melancholy and ultimately shrugging abandonment that just might follow. It’s just all about where we are.”

The Dream Syndicate has a long and storied history. But where are they right now? They’re here. Right here. In These Times.