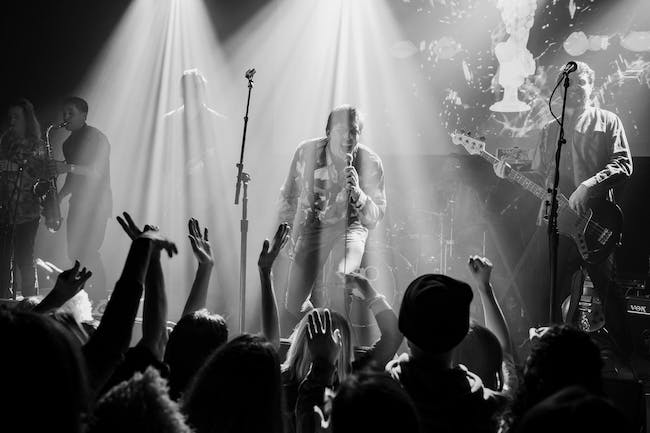 The fun and the funk never stop when it comes to Sweet Plot. Born out of a late night bay area jam session in 2014, Sweet Plot’s musical directions has continued to grow but its members ethos remains the same; to bring an unforgettable musical party where ever they roam. With its music steeped in the funk, soul and rock sounds of the sixties and seventies, the band brings a modern twist to a tried and true formula. It isn’t a question of if but of how hard you will hit the dance floor when Sweet Plot hits the stage. Hailing from San Francisco, Sweet Plot has not slowed down since hitting the ground running, releasing three full length albums and currently working on a fourth. 2018 was a big year for the group, playing sold out west coast shows as well as making an appearance as the opening act at Outside Lands Music Festival. 2019 started with a bang for the group, releasing their third LP, “Wall of Eyes”. Be on the lookout for Sweet Plot to make an appearance in your town as the band looks to further its travels and hit the road.

Reminiscent of James Brown, and Sly and the Family Stone, Diggin Dirt, is a band that is very well known around Humboldt County and the Pacific Northwest for uniquely blending together their influences that range from funk to blues to reggae to psychedelic-rock, to make something that is all together new and old sounding, in the best way possible. Diggin Dirt are an 8 piece band with tight horns and an even tighter rhythm section and they never fail to keep the dance floor moving all night long. Excitement, top notch stage presence, and high quality original songs are sure to be delivered in more than adequate dosages with Diggin Dirt on stage. Whether you intend to or not, Diggin Dirt will have you moving from your head to your toes if you happen to find yourself in the same room as this extremely funky powerhouse of a band.

Oakadelic is a funk, soul and R&B collective at the heart of the Bay Area's funk scene. It is also the houseband and host for three of the Bay Area's central Funk and Soul weekly Jam Sessions. It includes rotating members from many noteworthy musicians in the Bay, including Uriah Duffy on bass (Musical Director and bassist for Cee Lo Green, and bassist for groups such as Prince, Christina Aguilera, Whitesnake, Lyrics Born, The Family Stone and more) as well as Thomas Pridgen on drums (Former drummer of Mars Volta and Suicidal Tendencies) as well as Lionell Holoman (Keyboardist for Toni Toni Tone and Fantastic Negrito) among others. At the Funk Jams which Oakadelic hosts, they also been fortunate enough to perform with musical guests who have attended such as Killah Priestof WuTang Clan, Andy Vargas of Santana, Dennis Chambers of Parliament Funkadelic, Nadiya Deleye Lewis of The Family Stone, Terrace Martin of Kendrick Lamar's band and more. Oakadelic has also opened up for some of its own inspirations such as Orgone and the New Master Sounds, and has performed at historic Oakland Venues such as the Paramount, Yoshi's Oakland, and more. Primarily an instrumentally- driven ensemble lead by horns, the group combines its roots in 50's and 60's Jazz improvisation- and spontaneous stretching out of sections and unusually complex riffs-with its extensions to 70's and 80's four-to- the- floor smackdown fonk. The band's performance is particularly known for being both virtuosic and complex as well as *always* hands-down-booty-shaking groovy. A modern day branch of Parliament Funkadelic's spirit and influence, Oakadelic plays that smack down Oakland fonk that will be sure to stimulate Both the mind and body.