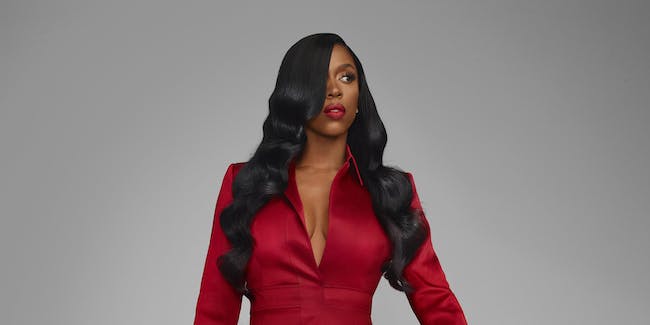 With tens of millions of independent streams, widespread critical acclaim, and her hometown of Detroit cheering her on, Kash Doll asserts herself as hip-hop's next champion. Following a tireless grind, she proves downright inescapable. Now, she chronicles every moment of this rollercoaster ride on her anxiously awaited full-length debut.

Growing up in one of Detroit’s roughest neighborhoods, Kash Doll led a far from semi- charmed upbringing. “Life in Detroit was rocky,” she recalls. “It wasn’t all bad but I knew I was destined to do bigger things and wanted to get out of that environment.” Young Kash lost her father on her first birthday, a date that would prove to be bittersweet in the years to come. Performing since the age of two, she’d jump on her living room couch to cover hits by Anita Baker and Aretha Franklin. She spent much of her childhood exploring her creativity through writing short stories and imaginative poetry as her escape from the world around her. Like her debut mixtape Keisha Vs. Kash Doll would later reflect, the budding artist led a life of duality. “One minute I was walking around in my momma’s heels wearing a tiara and the next I was in my gym shoes running around with the boys,” she says with a laugh. “One side of me has always been cocky; the other side is incredibly humble.”

The eldest of six children, Kash worked multiple jobs to help support her family and help her mom raise her other siblings. “I worked at Little Caesars, Ethan Allen, a temp agency, babysitting...anywhere there was money, I was there,” she explains. As a creative youth, she was often misunderstood and picked on by her peers in school for being different. Kash was determined to still express herself through her art by kicking freestyles on the walk to school and writing rhymes in her spare time. It would take some years before she’d even begin recording.

In 2014, Kash dropped her critically acclaimed debut mixtape Keisha Vs. Kash Doll. It was the project that arguably proved she was geared for greatness and gave people a glimpse into her life. Like the greats, Biggie, Eminem and Jay-Z who all made less than favorable choices in the streets in order to make a living, Kash had to fight from nothing and do what was necessary to survive. Kash used the money she earned from dancing to invest in a beauty bar business and studio time, which resulted in getting signed to her first deal. Though the excitement of signing would quickly wear off as she spent the next few years in a proverbial prison, locked in an inescapable recording contract.

“My grind from then until now? That was all on social media platforms,” she explains. “I couldn’t release music. If I put it on YouTube, the label would take it down. Soundcloud, they would take it down. All I had was social media. For a time, I was booking shows all over the country by myself but I was restricted from doing anything else to promote my music or get the same exposure as other artists who could stream, sell and release their music on the radio.” However, Kash kept the momentum going via social media. In May 2016, she dropped Trapped In The Dollhouse with full transparency that she was quite literally trapped in her agreement. The world began to take notice of her hustle. “Things were happening for me because of my amazing fans, aka Kash Bratz, and I just knew it was God telling me not to give up,” Kash says.

drive. Industry leaders began recognize her unique ability to rap about her experiences in the streets without glorifying them, which drew comparisons to male and female hip- hop legends like Eminem, Jay-Z and MC Lyte. By 2016, Kash was starting to show her uniqueness in era dominated by manufactured musicians. Top recording artists began to reach out to her because they connected with her story, her hustle, her rhymes and her rawness. She drew the attention of Rick Ross who gave her a free verse. She earned Drake’s respect and the Toronto rapper invited her to open during the Detroit stop of his Summer Sixteen Tour that August. “I love Drake,” she says. “I can never repay him for that. While I was locked in a contract, not able to release music, the crowd knew every word to my songs. That was one of the highest grossing tours, and I was a part of it.”

Then everything began to change. Kash continued the fight to leave her contract. On her birthday (March 14, 2017), she released “For Everybody,” a track that went viral overnight, however, her previous label took it down after over a million streams. They did the same with the Belly-inspired video, but word was already out that Kash Doll was the next to blow up. The goal was to make enough money to keep her legal team fighting. “I did over 70 shows in nine months with no music streaming,” she recalls. Artists continued to reach out to her knowing that she couldn’t release her own music but had so much talent to share. Big Sean added her to the massive “So Good” with Metro Boomin, Remy Ma brought her out on stage at Hot 97’s Summer Jam, Kash was awarded the BMI Social Star Award, and killed her verse in the BET Hip-Hop Awards Cypher. By the end of 2017, Kash Doll was finally released from her restrictive contract. “Kash had finally arrived,” she declared. “Now that I’m removed from it, it’s amazing to see how much I really did while being stuck in that contract.”

In February 2018, Kash won the Issa Wave Award at the BET Social Awards (along with her first televised performance) and the following month she dropped Brat Mail, also on her birthday. “It was just a collection of songs recorded during my struggle,” she says, “but I had to keep the Kash Bratz fed because they’ve been so good to me.” By the summer, she released The Vault, setting the stage for what’s to come, armed with the street singles “Here I Go” and “Let’s Get This Money.” The mixtape shot straight to Number One on mixtape sites, an indicator of the movement Kash Doll built. Under the direction of new management, her team struck a deal with Republic Records.

Most recently, Kash was invited to join DJ Khaled’s set as part of the epic Jay-Z and Beyoncé’s OTRII Tour during the San Diego and Santa Clara stops. For any new artist to have this type of opportunity would have been amazing in and of itself, but Kash was lucky enough to perform back to back in two cities. And kicked off 2019 by joining Meek Mill on the Motivation Tour.

After years of building her name and making moves when others would have found it impossible, Kash Doll, who was nominated for a 2019 BET Award for Best Female Hip Hop Artist, is ready for the next phase of her career, and with it comes a new identity. Keisha is the straight-forward tomboy and Kash Doll is the ladylike glamazon. But then there is KD, laid back and unbothered, now that success has finally been achieved.

“This whole album is that vibe,” she expresses of her KD-persona. “I draw from my experiences in the streets, but I’m also about being fly. I talk about becoming a boss despite the crazy real life situations that I’ve been through because I know that there’s other women out there going through the same struggles. I want to touch on a bit of everything. For me, it’s all about embracing every aspect so my fans can finally hear my

whole story. If you’ve haven’t heard of me yet, you’ll play this album and know me,” she explains. “And my day one fans will see and hear the growth and my consistency since I’ve been grinding towards this debut album for years.” The album will feature her already released tracks “Kitten” feat. Lil Wayne and her new summer-ready single “Ready Set” feat. Big Sean.

In addition to the music, Kash has her hands in several businesses through Kash Doll Enterprises, as well as charities like her initiative B.A.D. (Black American Doll) Girls, which donates dresses and styles young women in the Detroit area during prom season, and helps sponsor community events. She was given the Spirit of Detroit Award in recognition for her continued work to give back to her city.

It’s a testament to the fact that Kash Doll has endured multiple hurdles to reach this moment. Kash promises to deliver with her new project and, no matter what, will never stop working. The “grind mode” has definitely paid off and it’s now Kash Doll’s time to assert her title.