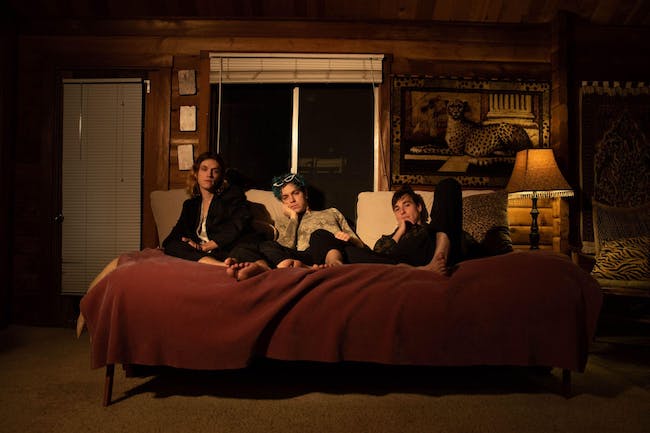 San Francisco indie-rock quartet Hot Flash Heat Wave rose to prominence in the Bay Area music scene in 2015 with the release of their 'Gutter Girl' music video, from their debut album Neapolitan, which was uploaded to YouTube and eventually made its way to the front page of reddit. Their versatile sound, at times reminiscent of golden 60s, power pop, dream pop, post-punk and indie rock, demonstrates a dynamic range of songwriting prowess centered around consistently infectious, sun-soaked melodies and guitar hooks. HFHW formed in Davis, California as a noise collaboration between Adam Abildgaard and Nick Duffy in 2010, expanding to a full band when bassist Ted Davis and guitarist Nathaniel Blum joined the group in the following years. Renouncing the traditional front-manned format of most contemporary bands, the four instead each contribute songs and share the lead. With the release of their sophomore album, Soaked, accompanied by a string of creative self-produced music videos in 2017, the group embarked on its first nationwide tour. Their first single, 'Bye Bye Baby', appeared on Canada's Viral 50 Spotify playlist. In 2017, HFHW released their sophomore album Soaked with OIM Records, which charted on college radio in the U.S. The band just finished up a national tour and SXSW visit with No Vacation to promote their new single 'Glo Ride' - a song released in collaboration with Broken Ent. Hot Flash Heat Wave will continue to release music and new videos throughout 2018.

Music is a catalyst of enhancing mood and when it comes to chill, laid-back nights, no one seems to enhance the mood better than L.A.’s 19-year old Jasper Bones with his trademark “Chicano wavy-soul.” The artist’s forthcoming six-song EP, Cruise Control (due in fall 2019)--which Bones wears hats of writer, performer and producer--marks the first collection of music to be released since he dropped his first single in 2017.

Bones’ latest single, “Someone Like You,” highlights his romanticized lyrics and musicality to create an atmosphere of relatable longing. He’s already caught the ears of Los Angeles Times music critic Randall Roberts who appointed him as “one of a number of Southern California gentleman romancers,” adding: “Bones is devoted to love songs and isn’t afraid to show his vulnerability.” Kevin Bronson of Buzzbands.LA has also taken notice of the “open-hearted aesthetic” that Bones creates. Overall, “Someone Like You” is “about dealing with self doubt while crushing on someone seemingly perfect, ” notes Bones.

“I take pride in my lyricism and songwriting and appreciate how much I’ve learned in production work over the last year,” says Bones. “It makes me unbelievably happy to know that others can relate to my lyrics or background which then unites all of us as a community. I’m extremely grateful for anyone that has taken the time to see me live or even just listened to one of my songs online.”

With his career’s rapidly-ascending trajectory, Bones stays grounded with the strong support system of family and friends. “They definitely spark emotion in me and have helped me learn how to allow myself to feel more, says Bones. “I try to consistently remind them of how much I appreciate and love them too. Those emotions then translate to the stuff I write depending on how life’s going or what mood I find myself in.”

Cruise Control taps in to his inspiration pulled from R&B and soul music, both classics and new modern takes on the genres. “I would say I mainly have pulled vocal inspiration from classic soul singers like Otis Redding, Marvin Gaye and Amy Winehouse,” affirms Bones. “I love how raw their voices sound. You can almost feel the pain behind the lyrics by just listening to the voices themselves. Before I found my own voice, I would sing along to several of their tracks and emulated their sounds until I found my own twist. Daniel Caesar is one of my top artists now because of how he incorporates a similar vocal texture on modern production.”

Another element that adds to the unique style of Jasper Bones is his lead guitar playing that he offers up sparingly, with ninja-like accuracy, on Cruise Control. “I absolutely love blues and jazz guitar,” says Jasper. “Most of the riffs or solos I come up with are based around jazz and blues scales. Growing up I really looked up to Jimi Hendrix’s ability and even taught myself to play behind my back because of him. Once again it also goes back to soul music and Motown in the way I try to tap into emotion and release it through my guitar playing.”

The release of Cruise Control has been a long time coming for Jasper Bones. “I hope people can tell I’ve been working on it for a while thanks to me overthinking every song and sound on it,” he says. “I love hearing people sing my songs back to me at shows. It’s one of the greatest feelings in the world knowing that someone else genuinely dives into your art so much that they want to express it as well.”

So here’s to us singing back the hook-drenched melodies from Cruise Control at the next Jasper Bones show or festival performances in 2019.