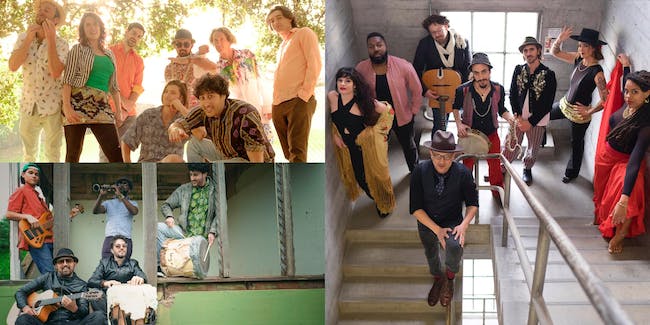 The San Francisco-based acoustic ensemble performs a repertoire of original compositions with an emotionally charged sound that is difficult to classify yet instantly recognizable. The group’s international roots shine brightly in their music with members from Spain, Quebec, France, Brazil and California and is deeply influenced by a wide range of musical traditions.

Barrio Manouche has been recognized for its surprise concerts, innovative style, complex technique, and its passion for musical improvisations.

Barrio Manouche is taking their audience on a magical journey, with a unique fusion of cultures and musical backgrounds, an auditory and visual feast like no other.

Bicicletas Por La Paz is a nine-piece Latin Circus Funk band fuses Colombian folklore with modern psychedelic funk to create a high-energy sound that combines thick harmonies and hip-hop drive with positive and political messages in both Spanish and English.

Based out of Oakland, California, Bicicletas Por La Paz, has members from both the United States and South America. It’s comprised of four vocalists, a drummer, two guitarists, a saxophonist, a trumpet player and an alegre player, as well as dancers, puppeteers, stilt walkers and visual artists.

Founded in 2013, Bicicletas Por La Paz is the creation of guitarist, Adley Penner, who lived in Colombia and studied Afro-Colombian rhythms for two years. After touring with other bands by car, Penner dreamed of creating a band that would tour on bicycle.

Bicicletas first bicycle tour, in 2014, down the California coast and into Mexico, included just a small group of musicians and a single, battery-powered amplifier. But this tour, which inspired the band’s name, “Bicicletas Por La Paz,” was hugely influential in shaping Penner’s vision for the band. In Mexico, where public spaces are used for social gathering and street art is revered, Bicicletas was inspired to grow their band into a fully sustainable, roaming bicycle circus, combining art and activism and pushing the boundaries of what art could be in the United States.

Since then, Bicicletas has realized their dream and expanded their bicycle touring family to create Biketopia, a bicycle-touring music festival. Biketopia, comprised of four Bay Area bands (as well as clowns, jugglers, stilt walkers and dancers,) toured the Pacific Northwest in 2016 and 2018, utilizing a bicycle-powered sound system to amplify the music.

With songs like Fruitvale, written about the Black Lives Matter Movement, and Keep On, which highlights the power of community in resistance, Bicicletas Por La Paz believes that music can grow community and be an act of powerful resistance.

Bicicletas Por La Paz has put out three albums, Musica Por Puppets (2015) and Coco Avenges (2017), and Surfeando un Cometa (2018). They have enjoyed performing at The Great American Music Hall, The New Parish, playing with Aterciopelados at The Independent, and a variety of West Coast Music Festivals.

A delicious Colombian/Caribbean fusion of rhythms, from the Caribbean Coast all the way down to the lush Andean meadows, with a heavy dose of Bay Area steez.

A mixture of furiously energetic salsa and funk, Caribbean Colombian music (Champeta, Cumbia, Chande and Currulao del Pacífico), and R&B along with jazz-edged brass and keyboard lines. It’s a rousing and entertaining style. But there’s classy musicianship at work behind the frenzy, as the musical versatility and tradition of it's members proves on the slower tracks, where they ease towards cool latin jazz.

Rooted in urban sounds from Colombia and Cuba and celebrating the traditional sounds of Latin America, CALMAO's fresh style adds a variety of elements to the mix. Incorporating the Afro-Caribbean tradition, the band performs with traditional Colombian instruments like the tambor alegre, tambora and pacific marimba de chonta.

CALMAO's airy yet virtuosic instrumental foundation connects traditional 1940's Cumbia and Son with the youthful spirit of modern San Francisco. It is the perfect backdrop to showcase the golden combo of singers: Ivan Rondón, Mayombe Cruz & Obrayan Calderón, at the very center of their signature "Neo-Salsoul" style.