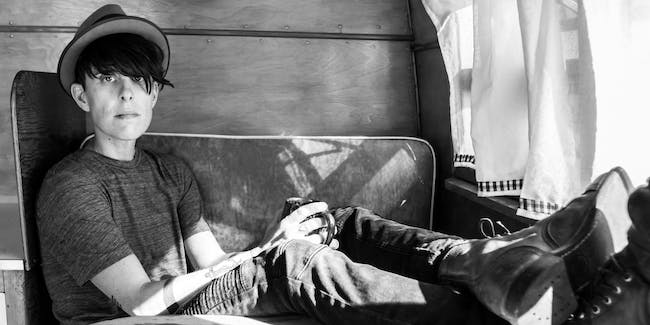 One of the most celebrated and successful poets in the field began their career in 1999 with a break-up poem at an open mic in Boulder, Colorado. Gibson then leaped into the forefront of spoken word poetry on the national scene in 2008 when they won the first ever Woman of the WorldPoetry Slam. Author of three collections of poetry and currently working on an illustrated collection of their most memorable quotes for Penguin (Winter 2018), Andrea (they/them/their) has also released seven (7) full-length albums.

The most recent album, HEY GALAXY (Jan 23, 2018 on Tender Loving Empire) was created in the midst of another project as a result of the current political upheaval in the United States. Gibson was working on an album entirely about love, accompanied by an orchestra, but after the 2016 presidential election they felt moved to put forth a more social justice-oriented project. “There’s a quote that says, ‘Art should comfort the disturbed and disturb the comfortable.’ I wanted to do that. I wanted to make something political and human and gutsy in its revolt.Something beautiful in its sweetness and rage and vulnerability.Something loud and tender at the same time.”

Janae Johnson is a Black Queer Poet, Community Organizer, Curator and Teaching Artist. She is the 2015 Women of the World Poetry Slam Champion as well as the 2015 National Poetry Slam Champion. Janae is also the Co-Founder of two nationally recognized poetry venues: The House Slam in Boston, MA and The Root Slam in Oakland, CA.

Her poetry has appeared in outlets such as ESPN, PBS Newshour, and Kinfolks: A Journal of Black Expression. Janae currently resides in Berkeley, CA and enjoys discussing Stevie Wonder, and Black Musicals.