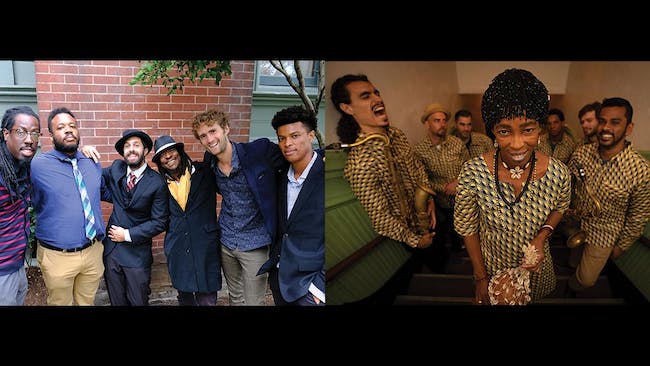 Afrolicious is coming off a spectacular 2019 that saw several game-changing releases including their single, “Love Shall Remain” and the EP “World of Possibilities”, as well countless electrifying shows at major venues and festivals around the United States. Fans around the country and around the world are discovering the party that took over San Francisco and the Bay Area for more than five years.

In the midst of a tumultuous 2019, Afrolicious is pushing a timely message: Love Shall Remain! With a single and new album with that title, the band that has kept audiences dancing around the world for more than ten years is channeling peace and exuberant joy into a world that is desperately in need of it.

The Afrolicious live experience is, in a nutshell, a joyous and raucous celebration of life. The Afrolicious sound combines inspiring lyrics, funky bass lines, and a powerful horn section while retaining the soul and feel of classic funk, disco, Latin, and Afrobeat melodies. Audiences looking to dance, be inspired, or celebrate life have found Afrolicious as their perfect conduit.

Since the release of their first two EPs which were produced by Rob Garza of Thievery Corporation, the reputation of the band and founding DJs Pleasuremaker and Señor Oz have grown and they have performed everywhere from Red Rocks, Burning Man, The Fillmore West, and Greek Theatre in Berkeley, to High Sierra Music Festival, Lightning in a Bottle, Electric Forest and Wakarusa festivals.

"Just try not to dance, we dare you!" - Okayafrica

"An invitation to get loose and get down in an Afrolicious space where Highlife meets 70s NYC Nightlife." KCRW

It’s 1976, and you just stepped inside a smokey club in Bamako, Mali. The air is thick with the gritty analog sounds of Malian folkloric music, with psychedelic guitars swirling, jazz-influenced hornlines, and hypnotic bass grooves. As the crowd moves to the music, the singer commands the stage with her soulful vocals, and dance moves that would give James Brown a run for his money. This is the vibe that Oakland’s Orchestra Gold creates at live shows, as well as its latest EP “Orchestra Gold: Vol. II.” Recorded at Guerrilla Studios in East Oakland, Vol. II brings together the powerful vocals of Mariam Diakite with the arrangements and guitar playing of Erich Huffaker, along with an all-star cast of Bay Area musicians – Luke Baće (bass), Leila Elizabeth (conga), Aaron Kierbel (drums), Chris Hoog (bari sax), Luis Andrade (tenor sax), Nicole Tierra Lobo (conga, kerenye, and percussion).